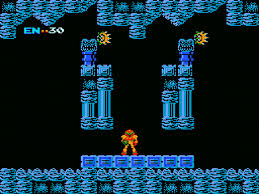 Metroid, along with the Legend of Zelda, was one of the first games to feature open ended exploration. Starring the bounty hunter Samus Aran, the game takes the player along her journey across the Planet Zebes as she attempts to foil the plans of a group of Space Pirates.

Despite showing its age in a number of areas, Metroid still shines in a few aspects. The controls are very good, the art direction does a good job of conveying a vast, alien world despite the limited graphics, and the music perfectly complements the tone of the game.

Unfortunately, there are many significant flaws with Metroid, most of which are due to the fact that it was attempting new things that had never been done before. While one can respect it as a pioneer, the reality is that it attempted to do many things before the technology and the experience of the developers could make the most of them. The end result is a game that does not hold up very well at all.

As some may know, I didn’t like the original Zelda, and I have to say that I dislike Metroid for many of the same reasons. Unfortunately, Metroid is even worse than the original Zelda when it comes to archaic and flawed design choices. Zelda, for all its faults, had a few things going for it that put it above Metroid. As vague and unhelpful as it was, at least Zelda had a map, where Metroid has none at all. As cryptic and nonsensical as many of the clues were, at least Zelda gave the player a few hints about what to do, where Metroid doesn’t give the player any direction whatsoever. And as difficult and frustrating as it can get, Zelda at least starts off relatively simple, and gradually increases the level of challenge, where Metroid is a frustrating chore right from the get go.

This is due in large part to the fact that Metroid starts the player off with almost no health, but makes the enemies inflict ridiculous amounts of damage right from the start. While the combat is better than in Zelda, it has the problem of not giving the player enough tools to deal with the various enemies and obstacles they have to overcome. While there are power-ups that do eventually mitigate this issue, it takes quite a while to get to that point.

And then there’s the biggest problem of all, the fact that the game is completely and utterly unintuitive in its design. As bad as Zelda was in this regard, at least it had a map, and distinguished between the overworld and the dungeons, making it at least feasible that the player could figure out the goals and objectives of the game. Metroid, on the other hand, gives the player nothing. All they can do is wander aimlessly around until eventually they find which way to go next.

But doing so is an exercise in frustration, because many of the areas look exactly the same. In conjunction to the fact that there is no map, it is extremely easy to get lost and disoriented. As I said in my Zelda review, there is something fundamentally wrong with a game where it is entirely possible to wander around for hours and make no progress. This could be forgivable if the game was fun to play, but it’s really not that enjoyable at all, as the charm of the game quickly wears off once the numerous design flaws turn the game from a space faring adventure into a monotonous chore.

To top it all off, there is another game that fixes all of these issues and improves on the things Metroid did well, and that game was Super Metroid. Super Metroid was able to do what the original Metroid could not, and it surpasses the original in every single area imaginable. As a result, Metroid is unquestionably obsolete.

While somewhat interesting as a piece of gaming history, as an actual game it is an archaic, outdated mess that has little to offer to the modern world, particularly when compared with its successors.