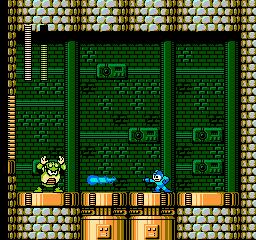 Megaman 3 had a rather troubled development period, with the developers claiming that the game was rushed out the door before they could quite polish it up. And honestly, having played Megaman 3, it does feel like a game that wasn’t quite finished, particularly when compared with Megaman 2.

This is thankfully not the case with Megaman 4, which not only feels like a more complete experience, but really steps up the production values, at least for NES standards. The game looks more appealing and detailed than any of the previous games, and continues the tradition of giving each level a distinct and unique aesthetic.

It includes all of the new additions from Megaman 3, while also making additions of its own. In particular, Megaman now has a charged shot, which gives him more breathing room while dealing with enemies. Megaman can also obtain some new items that give him increased mobility. And the new addition of an extra antagonist, Dr. Cossack, allows for the game to be longer without resorting to the more manipulative and tedious method of the doc robot stages from Megaman 3.

In many respects, Megaman 4 surpasses the previous games, and is more fun to play than Megaman 3. But like Megaman 3, it also has a fair number of shortcomings. Most of these flaws come down to the fact that the overall design and difficulty of the game is unbalanced, being too easy in some respects and too hard in others.

It’s too easy when it comes to the weapons Megaman has available to him. While the items are much more useful and fun to use than in Megaman 3, the charged shot renders many of them rather redundant. Because the default blaster in Megaman 2 and 3 was relatively weak, it incentivized the player to get good with the weapons, and Megaman 2 in particular was good at providing plenty of situations where Megaman’s arsenal was actively useful. This is not the case with Megaman 4, as the charged shot means the player doesn’t really need to use the weapons except in very specific situations. The game should have either balanced things out so that both the charged shot and weapons were actively and equally useful, or it should have eliminated one and concentrated on the other.

In addition, Megaman can also obtain extra items besides the Rush items to reach new areas, but they’re rather redundant, and don’t serve much purpose aside from cluttering up the gameplay.

Now, the game is too difficult when it comes to many of the obstacles the player has to deal with. Megaman 3 focused less on straightforward and fair challenges and more on trial and error gameplay, and Megaman 4 unfortunately continues this tradition. This time around, however, the level design is a bit more obnoxious, as there is a much greater abundance of obstacles that are one hit kills, namely spikes and bottomless pits. As a consequence, the game is a bit of a chore the first time around, and like Megaman 3 is only really fun once the player knows what to expect.

Megaman 2 had an elegant simplicity to it, and managed to capture a constant and endearing element of fun to its gameplay that both Megaman 3 and 4 didn’t quite manage to replicate. I did have fun with Megaman 4, and I actually enjoyed it more than Megaman 3, but not as much as Megaman 2. In the end, if you enjoyed the first 3 Megaman games, you’ll probably like Megaman 4. But if Megaman 2 and 3 didn’t win you over, Megaman 4 won’t win you back.