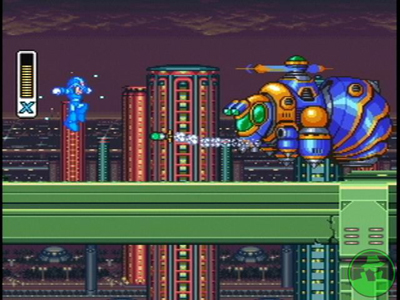 Megaman 2 was my favorite game for the NES. However, by Megaman 3 the formula was starting to get a little stale, and by the time Megaman 6 came around, the series had vastly over stayed its welcome. With the franchise dwindling in quality and popularity, something needed to be done to revitalize the series. The answer came in the form of Megaman X, the first game released for the SNES, and one that managed to retain the familiar elements of the NES games while adding its own flavor to the mix.

The first thing to note about Megaman X is how expansive it is compared to classic Megaman. While the levels in Megaman were good, they were always constrained by the limitations of the NES. The levels in Megaman X, on the other hand, are much broader in scope, and allow for new challenges and new ways of overcoming obstacles.

In Megaman X, the player retains the same basic abilities of classic Megaman, but with a few new twists. First of all, the charged shot introduced in Megaman 4 returns, but is even more useful and fun to use than in Megaman 4. However, the game avoids making it feel overpowered, which was one issue with Megaman 4. Another new ability is the ability to wall jump. This ability gives the player much more mobility, and allows the player to evade deaths that would have been unavoidable in the classic Megaman games. Finally, there’s the dashing ability. This is really just a variation of the slide ability introduced in Megaman 3, but it’s a useful and fun move.

The game continues the tradition of having great art direction and great music, but with the enhanced capabilities of the SNES fueling it. As a result, playing through the game is a visual and auditory delight.

In many respects, Megaman X surpasses its 8-bit predecessors. Unfortunately, it shares some similarities with Megaman 4, in that the design is rather unbalanced in certain aspects. I’ve heard the complaint that this game is too easy, an accusation that I find, quite frankly, baffling. While it does have a different feel from the classic games, I felt that the overall difficulty was about the same as the classic games. A good amount of the difficulty comes from legitimate challenges, but unhappily there are some flawed design choices.

First of all, the game starts you off with significantly less health than in the classic games. This makes the game feel rather punishing at times, as you can’t afford to make too many mistakes before dying. The only way to increase your health is to find hidden item packs in the levels, many of which are difficult to get, and some of which you won’t even realize are there.

The bigger issue with the difficulty, however, is the lives system and the iteration times. An archaic trend of the NES era, the lives system was only tolerable because it was a cheap way to make a game last longer. For the SNES era, however, when games could be much bigger and longer, and were overall better designed, the inclusion of the lives system is just infuriating.

The game is very stingy with checkpoints, so if you die, the game will send you back a ridiculous amount. And if you run out of lives, you have to do the entire level all over again. I’ve said it before and I’ll say it again: You should NEVER have to wade through minutes of content you’ve already mastered just to get another shot at the spot that was giving you trouble.

Another major problem is the inclusion of robot master weapons. Like in Megaman 4, the charged shot renders the other weapons mostly redundant. Here, however, it’s even more apparent that the other weapons were only included out of some misguided sense of tradition, and are only useful under very specific circumstances. Most of the game is built around using the charged shot, so it would have benefited the game to just eliminate the extra weapons and keep the overall design more simple and straightforward.

Finally, the game is rather short. Megaman 4 managed to figure out a way to make the experience a good length without padding it out, so it’s rather puzzling that Megaman X went back to the shorter structure of the first two games.

Megaman X was brave enough to redesign and change some things about the Megaman franchise, but seemed shackled to other things out of some misguided need for consistency, and the end result is a game that is rather sloppy in its design. If it had gone all the way, if it hadn’t been afraid to truly reinvent the series, it could have easily been better than any of the classic games, even 2.

Despite its shortcomings, though, Megaman X is a fun game. It’s a fresh take on the Megaman formula, and while it has its flaws, it’s also very unique. I can see why this game isn’t talked about as much as the classic Megaman games, but it’s a worthy spinoff, and a pretty good game in its own right.