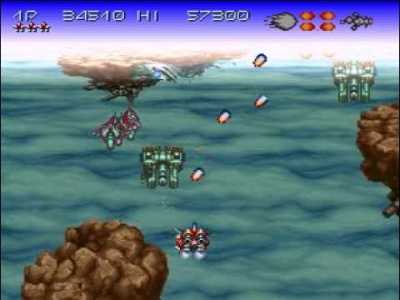 2D shooters are not a genre of games that I think are inherently bad, but a lot of the ones from the 8 bit and 16 bit era do things that seem designed to make the game into a chore rather than an enjoyable experience. Axelay is one of these games.

Before I rail against Axelay for the things it does wrong, I would like to mention the things that I thought were good. The graphics and art direction are very well put together, and hold up even to this day. The music is also very memorable, and compliments the overall atmosphere of the game very well. The levels are interesting and varied in design and aesthetic, and the bosses are pretty distinct. The weapons are pretty fun to use, and the controls are intuitive and responsive. It would be a great game if it weren’t for the problems I’m about to go over.

First of all, it commits the cardinal sin of making the player start the entire game all over again if they make too many mistakes. There’s no excuse or reason for this kind of design. It doesn’t make the game better, or more fun. All it does it make the game last longer and force the player to wade through content they’ve already mastered.

Unfortunately, it doesn’t stop there, either. Axelay also forces players to start levels all over again if they make too many mistakes, which is asinine for a number of reasons. First of all, most obstacles are one-hit kills, and the ones that aren’t will disable some of your weapons, which makes it almost guaranteed that you’ll die shortly thereafter. Secondly, there are so many obstacles on screen that it’s virtually impossible to avoid them all, so you’re guaranteed to die a lot.

A game that did this sort of thing much better was Star Fox. Star Fox was a challenging game, but it was fair. It never threw more at the player than they could handle, and gave them enough time to avoid and counter the various obstacles the game had. Star Fox also had a health meter, which allowed players to make a few mistakes without automatically losing all of their progress. And while you did have to start the level all over again when you died, it was always because the player messed up, not because the game set them up for failure.

And that’s Axelay’s main problem, it seems designed to make players fail rather than trying to make them succeed. A hard game is not a problem, but it has to be fair with its difficulty. When a player dies, it has to be because they messed up, not because the game threw more at them than they could handle, and the player should not be unfairly penalized for making a mistake.

Despite having some good elements, the way it’s designed, Axelay could only appeal to masochists who have an unhealthy tolerance for repetition and trial and error gameplay. For everyone else, this is one title I cannot recommend.