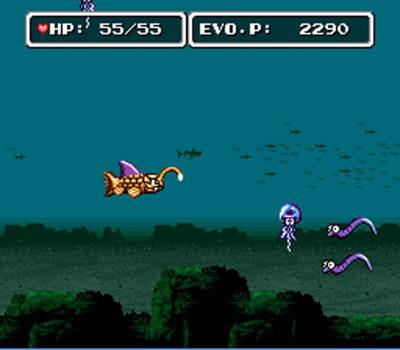 While Spore may be the most well known game to focus on the evolutionary process, it wasn’t the first, and one of the lesser known games that did it earlier was EVO: Search for Eden. It has a small following, but has largely faded into obscurity over the years. Has this loss in visibility been justified, or is EVO an underappreciated gem?

EVO has the player assume the role of an early life form, a fish, and guides them through the process of evolution, becoming stronger and eventually gaining sentience and entering the Garden of Eden. The player gains points by defeating the different creatures you encounter, and these points can be used to evolve your creature.

One thing EVO does well is its creativity. Like Spore, the amount of possible creature designs is pretty large, albeit much more limited than in Spore. The game also makes each new stage of life distinct and memorable, with unique environments and enemies.

Unfortunately, it shares some bad similarities with Spore. Like in Spore, there’s really not that much choice involved. While you can customize your creature in different ways, you’re not really given a choice as to how your creature can evolve. Rather than giving the player the freedom to decide what kind of animal they want to end up as, the game forces you to follow the path that evolution took in real life. This makes the game feel less like you’re going on a journey and more like you’re ticking off marks on a checklist, which was a problem Spore also had.

Another problem with EVO is that there really isn’t that much to do. While Spore had many problems, there was still a lot of interesting things the player could do, particularly in the space stage. In EVO, on the other hand, all you do throughout most of the game is just fight other creatures in 2D, side scrolling levels. That’s pretty much it, and there’s not a lot of variety to the gameplay.

This is compounded by the fact that the gameplay itself is incredibly sluggish and unmemorable. The combat in particular is very weak, and unfortunately takes up a large percentage of the game. While it’s concept is pretty unique, the actual gameplay is very similar to every other platformer for the SNES. And in that regard, EVO is by far the weakest platformer I’ve played for the SNES so far.

In the end, EVO is indeed like a 16 bit predecessor to Spore. Both are rather impressive as creativity tools and as an example of what this interactive medium is capable of. But as an actual game, both fall short in many areas.