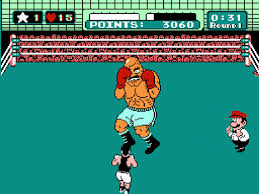 One genre in gaming I’ve never cared for is sports simulators. I’ve always felt that, if you really enjoy the sport, you should go out and do it in real life, not just pretend to do it. So I wasn’t expecting much from Punch-Out. I thought it would just be a dull boxing simulator that’s been overhyped by the nostalgia of older gamers. I was pleasantly surprised, however, to find that Punch-Out was in fact one of the most enjoyable, well designed, and unique games for the NES I’ve played so far.

Punch-Out is a game where you take control of Little Mac, a lightweight who is determined to become a boxing champion, and must defeat various opponents in the ring to achieve his goal. Each fight feels fresh and invigorating, each one requires a great deal of strategizing and precise timing, and if you fail, it is entirely your fault. The controls are tight, the graphics are simple but appealing, the music is quite good, and it has a finely crafted difficulty curve that makes the game gradually more challenging in a hard but fair manner.

Punch-Out is a prime example of how watching someone playing a game and playing it yourself can be two very different things. I didn’t expect much from it, but I can safely say that it deserves the praise it gets from older gamers. While it shows its age in a few respects, and some of the fighters give off slightly racist undertones, Punch-Out is a solid game that holds up incredibly well.