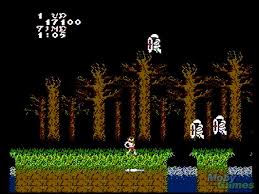 The NES era is often known for having very difficult games, and many gamers seem to want to go back to the design philosophies that brought forth many of these challenging games. This is a mindset I cannot begin to fathom, because much of the NES era’s difficulty came from bad design choices, both deliberate and unintentional. These design decisions tended to make games longer, not better, more grueling, not more fun, and often required the player to jump through ridiculous hoops that would never fly today, and for good reason.

Ghosts ‘n Goblins is the NES era at its worst. It is stuffed full of archaic design decisions that would thankfully never be allowed today, and is designed to last as long as possible without any regard for the player’s enjoyment or wellbeing. It is a game that is utterly devoid of fun and joy, and seems especially designed to piss off the player as much as possible. What are its sins?

First of all, the graphics are downright ugly. I know this was an early NES game, but despite the limited graphics there are plenty of NES games that have an appealing aesthetic. But not only are the graphics of poor quality, the art direction is extremely bad. The games various levels are an eyesore that are not fun to look at. In addition, the art direction doesn’t give any sort of context or life to the game. Castlevania managed to make the player feel as though they were traveling through Dracula’s castle. Ghosts ‘n Goblins, on the other hand, just makes the player feel as though they’re making their way across ugly platforms against ugly backgrounds, with only a vaguely spooky, Halloween theme tying the whole mess together.

Second of all, the music and sound effects are downright unpleasant. In addition to not being pleasing to the eye, the game is no more appealing to the ears. Again, despite the limitations of the NES, there are games that manage to have catchy and memorable soundtracks that are pleasant to listen to. But this is not the case with Ghosts ‘n Goblins. The music is screechy and grating, and the sound effects aren’t much better. It’s a load of unpleasant noise that, combined with the unappealing visuals, makes playing the game a thoroughly miserable experience.

And then of course there’s the gameplay. It’s like if Castlevania had all of the fun and creativity sucked out of it, leaving only the frustration. The controls are stiff, the items aren’t fun to use, the combat can range from annoying to infuriating, and making even minimal progress is an exercise in endurance. It’s so archaically designed and so relentlessly frustrating that one has to wonder if the developers were straight up sadists determined to torment anyone unfortunate enough to pick up their game.

I really have nothing more to say about Ghosts ‘n Goblins. It’s aged terribly, it wasn’t that good to begin with, and the only people who might like it are masochists who have too much time on their hands.