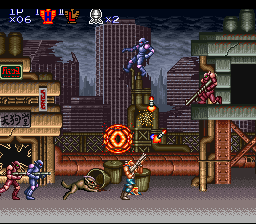 The SNES era had a lot of games that were either spiritual or actual successors to titles from the NES era. Some of these, such as Super Metroid and Super Mario World, took what their forebears did and took it to the next level, ironing out the problems and expanding on the things that worked. Others, such as Super Castlevania and Megaman X, updated and improved some elements, but unfortunately held onto archaic traditions of the NES games, resulting in a game that is good, that could have been better, but is at least trying.

And then there are some games, such as Super Punch-Out and Contra 3, that make no alterations to the established formula whatsoever. They simply give the old formula a 16 bit paint job and call it a day. Super Punch-Out was able to get away with this because the original formula was fine as it was, and didn’t need to be fixed. Unfortunately, this is not the case with the Contra series.

I’ve said it before, and I’ll say it again, a lives system in any game has always been about making a game longer, not better. The original Contra’s live system was no exception, but it was able to get away with it because it had the Konami code and a properly paced difficulty curve across the various levels.

This is not the case with Contra 3, which does not have a saving grace like the Konami code, and whose difficulty feels more reminiscent of the sadistic Super C rather than the original Contra. While Contra started off fairly simple and got gradually harder, Super C and Contra 3 are aggravatingly difficult right out of the gate.

I’m not opposed to hard games. For example, I love Super Meat Boy, and that’s a really hard game, particularly for the dark world levels. But in Super Meat Boy, when you die, you’re never more than a few seconds away from the spot that gave you trouble, and the game doesn’t force you to replay any of the previous levels you’ve already beaten if you make too many mistakes. All that matters is whether or not you can overcome the current challenge presented to you, and ultimately that’s all that should matter.

It’s a shame, because there are a lot of good things about Contra 3, and the high difficulty isn’t even the problem. The problem is that the game retains the ridiculous iteration times and outrageous lives system of the 8 bit era, and those two faults alone drag down the whole experience. It has some merits, but I’d recommend using save states if you intend to play this title.