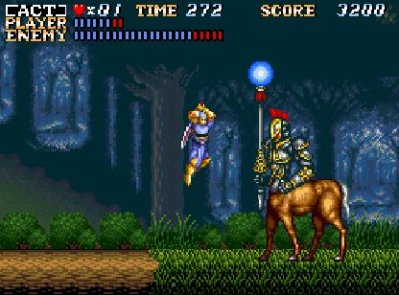 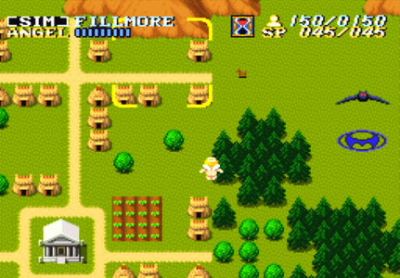 While there are quite a number of god games centered around building up a civilization nowadays, they were much less common back in the 16 bit era.  One of the first games in this genre was Actraiser, a god game that is widely regarded as one of the best titles for the SNES. But how well does it hold up?

Actraiser combines more traditional side scrolling action with a civilization sim. You take the role of a deity tasked with ridding a world with evil. From a sky palace, you observe different lands and go down to rid each one of monsters and allow human civilization to grow and flourish.

At the beginning of each stage, you descend down from the sky palace and play through a side scrolling level that feels very similar to Super Castlevania, except you’re armed with a sword instead of a whip, and the controls aren’t quite as stiff. Once you beat the level, you are then tasked with spreading human civilization in the newly liberated land. While you can’t control the people directly, you can direct them, and are able to perform miracles to clear obstacles and defeat monsters. You have to guide the people to seal all of the monster lairs in the land so they no longer need to fear evil. Once they’ve done that, you then must complete another side scrolling level to defeat the last monsters in that land. Once you do that, you then move on and do the same thing for all of the other lands.

In many respects, Actraiser succeeds in what it sets out to do. Each of the side scrolling levels is distinct and memorable, as well as challenging in a hard but fair manner, despite the inclusion of an annoying lives system.

The civilization simulator sections are also pretty good, and each land has its own unique environments and strategies to spreading the human civilization.

But the problem with Actraiser is that it feels like two different games in one, and the two don’t connect that well. It would have benefitted the game if it had focused on either being a good action platformer or a good god game, rather than opting for a mix of the two.

While the side scrolling levels are good, they’re also a bit short, and feel rather disconnected from the civilization aspect. The levels would have been more memorable if they had been longer, and if they had been synced up, like in Super Castlevania.

Similarly, while the civilization sim part of the game is good, it’s also rather shallow, and there isn’t a lot of choice in how you can direct your civilization. All you can really do is help the people to rid the land of monsters, and once they’ve done that, there’s not much left for you to do. There are also times when the people of the lands will pray to you, but their dialogue is so generic and bland that you’re constantly reminded that you’re interacting with a group of sprites rather than actual human beings. The game would have been better if you actually felt like you were playing as a deity, and that you were actually guiding real people along whatever path you decided to have them follow.

In the end, Actraiser isn’t a bad game, it’s just not as good as it could have been. If it had focused on one aspect or the other, it could have felt like a more fleshed out and complete experience.