Skip to content
HomeAladdin for the SNES RetroActive Review 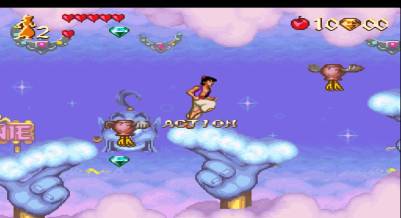 Most licensed games tend to suck. It’s true now, and it was true back during the SNES era. But occasionally, there are some licensed games that come around and are actually pretty good.

While the controls are a little wobbly when compared with other 16 bit platformers, they’re still responsive and intuitive, and the game provides a variety of challenges for the player to overcome. Each challenge is distinct and fair, and players are usually not unreasonably punished for making mistakes.

The aesthetic and music of the game is particularly well done, and shows a lot of respect for the original source material. The environments are very similar to the ones from the film, and the 16 bit remixes of songs from the film that play through some of the levels are a joy to listen to.

It does have a lives system and limited continues, which are two things I’ve complained about before. However, they’re less of an issue here because A) the game is fair in its challenges, B) the levels are really fun to play through, and C) there is a password system that mitigates the issue for the most part.

It’s not a masterpiece, but Aladdin for the SNES is a pretty good game, and if you have an appreciation for 16 bit platformers or Disney’s classic film of the same name, then this is a game that is very much worth checking out.