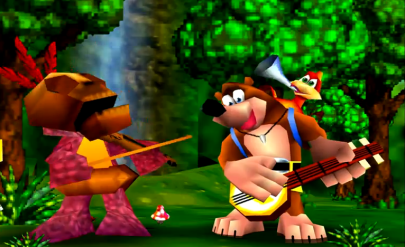 After Super Mario 64 set the standard for 3D platformers, there were many other games that tried to emulate its success, while having their own spin on the genre. Some did this well, others not so much.

Released two years after Super Mario 64, Banjo Kazooie was a 3D platformer that took concepts started in Super Mario 64 and expanded upon them, creating something unique and memorable in its own right.

The gameplay is excellent. Like Mario in Mario 64, the two main characters, Banjo and Kazooie, have a very diverse move set that allows them many different ways of overcoming obstacles. The controls are smooth and intuitive, and the game is fair in its challenges, for the most part.

The visual design is fantastic. While it does show its age, it’s probably the best looking N64 game I’ve played so far. Each environment is distinct and memorable, and the soundtrack compliments the different levels perfectly.

One problem is that going back and forth through the overworld is a bit of a chore, as is finding where you need to go next. Most 3D platformers from this era have an overworld that’s fairly straightforward, while it’s in the actual levels where the player has to do the exploring or searching for items. In Banjo Kazooie, however, before you can access new levels, you have to figure out where they are, and some levels are easier to find than others. A little bit of exploration in the overworld is okay, but too much makes playing through the game feel disjointed. It also makes going back to previous areas more tedious than it should be.

Another annoyance is the camera controls. Of the N64 games I’ve played, the only ones with controls that have actually aged well are the N64 Zeldas. In every other 3D game, including Banjo Kazooie, the camera controls are always a bit awkward, and make certain sections a headache to get through.

The biggest problem with the game, however, is the fact that it deliberately wastes your time with the items you have to collect. When you collect one of the jigsaw pieces, you get to keep it. So even if you die or leave the level, that jigsaw piece is still yours. Unfortunately, that’s not how it works with all of the other items in the game. When it comes to the musical notes, for example, if you die or leave the level, you have to collect the musical notes all over again. Why they designed the game this way is something I simply can’t understand. If you have proven that you were able to get an item the first time you went through a level, you shouldn’t have to prove it again when you come back to collect more items.

This inherent flaw did dampen my goodwill toward the game a fair bit, but there were enough things about it that were done well that kept me going. Despite its problems, it is overall a well designed game, and a very fun one at that. Whether or not this game is for you will depend on how much you like 3D platformers. If you love them, check it out. If you don’t, this may not be for you.